“Wed, 03 Sep 2003  I am taking refuge in the internet cafe.  Another trip to the market during rush-hour.  After a while, the smell of smoked fish and raw meat becomes overpowering, and when a tray full of pig legs passes right beside your head, your stomach starts to become upset with the conditions.  Not to mention the 30 second intervals of random people wanting to speak to you. Ehh, Obroni!  Where are you from? What is your name?  I love you lovely ladies.  and on and on.   So, here I am again.  I am finally becoming accustomed to life here. People carrying incredible loads on their heads no longer startle me, and the bustle and smell of this city is starting to become normal.  The multitude of tiny shops called “Jesus Saves Salon” and “Grace of God fashions” are no longer surprising in their numbers.  My mornings are very peaceful (aside from the music that begins sometimes at 7am), which is necessary to prepare me for the assault of the day. The word obroni is now a permanent part of my awareness, and my relations with people are never without its accompaniment.  It has become a bit discouraging where making friends is concerned.   The KNUST campus doesn’t have more than 20 white people in its student body equal to that of UW’s, and the population is mostly male, around 75%.  This makes me a white female first and foremost and I have not had more than one conversation that wasn’t completely centered around that fact, implicitly or explicitly.

Next weekend, just two of us are headed to Togo for the largest voodoo festival in W. Africa.  Apparently we can only take a bust to the border town in Ghana and then have to walk to the next town.  I am very excited about that mini adventure.”

I can’t seem to remember or find a separate entry on this side trip. It is worth talking about. Togo is especially worth thinking about at a time when so many people are discouraged even disgusted with the United States. It is so easy to take it for granted. Getting to Togo was an adventure in itself. I felt safe in Ghana, but had it been almost anywhere else, I think our journey would have been dangerous. There were late nights in empty villages when we didn’t know where to find the next leg of the journey, etc. Crossing the boarder from Ghana to Togo was palpable. The security we felt as two females traveling on our own with absolutely no way to blend in, was gone. We didn’t really speak French, so that made things more difficult. I can’t find anything about this on google right now, but we were told that several students were shot recently in Togo by the government, which was still a dictatorship at the time. A cab driver also told us how to wrap our money in our wallets so the police wouldn’t take it. That was on our trip from the border Into the city. We felt the absence of a stable government, it was like the floor had dropped away. I have never felt less safe in my life. I will never forget the feeling of believing you were truly on your own, with no recourse in a foreign land. Our government is flawed, it fails in efficiency at times, our law enforcement is as well- but on the whole it keeps us safe. We don’t even know how much it does until we set foot on soil where that isn’t true. (This was only my experience by the way. Togo in 2003 may very well have been a fine place for its citizens and other travelers for that matter, I really don’t know.)

Another part of what gave that trip darker tones was the voodoo market. I will post pictures, these are all in film and must be scanned. This is also not a comment on voodoo as I don’t know much about it, but the market had skulls of animals I will never see alive. It was strange and fascinating. We did visit a voodoo priest and he gave us a prayer and some talismans for safe travel. He did something which was supposed to bind us to the talismans. I still have mine, I have been oddly afraid of getting rid of it. Those dolls gave us a scare later on. Man always fears what he does not understand, and dead things as well. 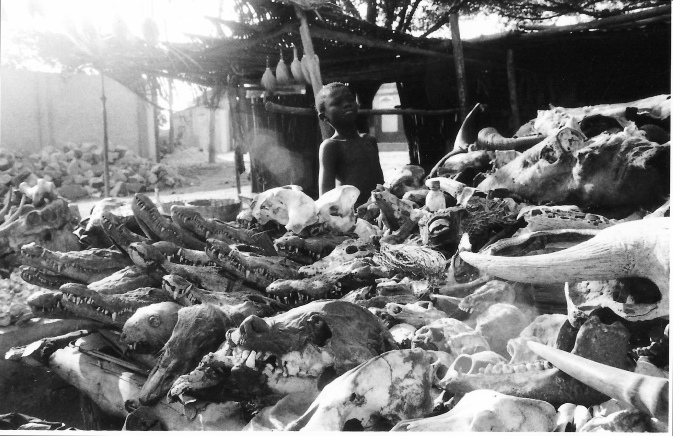 Once we were finished with the market, we were off to the country side to get closer to the festival. We thought everything would be booked up. We had to use guide books for everything, because Internet was not widely available. It was also 2003 and the resources were different, so we relied on the trusty lonely planet, which was sometimes accurate and sometimes not. We couldn’t take a cab directly to the hotel where we were staying. We had to take one to an outpost, at which point we had to wait for a messenger (a boy on a bike) to go to the hotel to get us transportation. Once we got there we were isolated. Very isolated. We had to rely on the same boy on a bike to get us out if we wanted to.

The location itself was beautiful, beachside, and peaceful. The place itself was decidedly creepy. There was once a zoo of sorts on the property, and we inspected it when we arrived. We walked among what we thought were empty cages in a state of decline, until we noticed that they were open. Then we noticed various primates in the area and decided to head for check in. As we were (nervously) walking away from the zoo we heard a galloping behind us and turned in time for one of said primates to run smack into the back of my roommate’s legs. It was terrifying. The animal did not take interest in us beyond that encounter and loped away. Once we reached the check in desk, it was clear we were the only guests and there appeared to be only one person running the hotel. The solitude and the remoteness combined forces to enhance the eeriness that was mounting in our imaginations. Still undeterred, my roommate and I went down to the beach to take in the view. As we sat on the sand, the man who was running the hotel just stood above us, watching us. Perhaps and even probably there are plenty of non threatening explanations for this behavior. It was however, immensely disconcerting to us. Any one of the details on our trip on it’s own would have been a tolerable quirk of traveling in a very foreign land, but they were all coalescing in a very threatening manner. 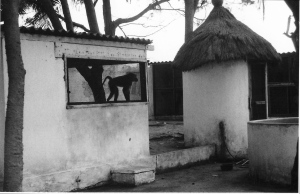 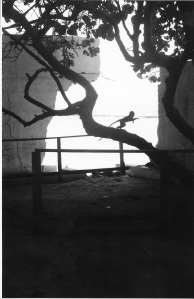 We finally made it to our little cabana or palapa or shack or whatever you want to call it. It had one bed and mosquito netting and a door with no lock. Delightful. That night, was one of the most frightening nights of my life. What was I afraid of exactly? I didn’t know, and that is what made it so frightening. The wind began to howl sometime in the night and my roommate and I awoke suddenly to loud thud. Being startled out of sleep, neither of us could identify the source until it happened a couple more times, it was coconuts falling onto the roof of our shelter. We decided the next morning to head back to Ghana. I was relieved to find that she was as uneasy (terrified) as I was.

Nothing actually happened to us, at least nothing actually overtly threatening while we were in Togo. It was just one of those instances where our internal alarms were firing, and we took heed. Perhaps we were never in danger, perhaps we would have made it to the festival which would have been strange and wonderful and one of a kind. Perhaps not. I have not fled in fear in very many instances in my life, and have actually taken what might seem like stupid risks in my travels. It is hard to identify whether fear is justified or not, whether it is instinct keeping you safe or an irrational emotion bent on deterring you from adventure. That I have been in other situations which seemed unsafe but where I felt no fear, tells me that I can rely on instinct to some degree. In any event, I am grateful for these experiences, and even more grateful that they are the exception and not the norm in my life. I feel that this is true in a large part because of our great country. (I am not using this ironically or fanatically). We may be in something of a state of decline, but there is a lot about the United States that is still great. This is a another gift these travels gave me, and it inspired in me a desire to participate in advancing the interests of my community (great and small) which has given me so much. We benefit so much from where we are lucky enough to be born, that a great many of the benefits aren’t clear until you experience their absence. Happy holiday season.